Barcelona wins me over more and more each time I visit.  Actually, this blog could have been centered in Barcelona because the year before I accepted my job offer in Genoa, I had an opportunity to work there.  In the end, I wasn’t ready to leave NYC — needed a year to prepare myself mentally, vest my pension, and some other logistical things.  Sometimes I regret that decision but realize that my life here in Italy has been absolutely lovely so there is nothing to regret.  Yet for much of my third visit to this vibrant, cosmopolitan yet distinctly Catalonian city, I kept wondering: “Why don’t I live here?”

I first visited Barcelona in 2003, a trip booked entirely on my credit card with plans to pay it off later.  I don’t know what I was thinking because I was a grad student / lifeguard at that time.  That was a bad plan, yet I have always  had the travel bug.  I met up with friends where I went to school in England, then headed to the Netherlands to meet up with a KLM flight attendant I met while traveling in Australia.  Finally, I flew to Spain for the first time, playing the following song over and over on my disc man (I did not have an ipod until early 2005).

Go ahead – play it.  It makes a soothing and appropriate background to the post.  But not if you don’t want to . . . it would end up too much like the old myspace, then . . .

Spain was absolutely beautiful, but it was in the middle of a continental heat wave, with temperatures reaching 104 degrees each day.  I spent most of my time in Internet cafes, blogging about my thoughts while I briefly emerged into the searing heat for a stroll or a sticky, stuffy metro ride.  I got heat exhaustion while riding on upstairs an open-topped bus, and when I walked into one of the Gaudi buildings, the air conditioning made me gasp, and I dropped my SLR to the floor, the case popping open, exposing my film.  I found time for a refreshing break in Montjuic, the setting of the 1992 Olympics which I remember well, and had some paella on Las Ramblas–but felt that, ultimately, I didn’t really experience Barcelona properly. I had to return.

My second visit, I accompanied four of my high school students from the Bronx on our school’s first trip to Europe, which I had coordinated.  It was early spring in 2010, and a magical time in Barcelona, with sunshine and mild temperatures that invited long, wandering walks.  We explored the coast, the medieval streets, saw the major sites, were entertained by flamenco dancers, and had a wonderful time.  My students expressed their interest to move here one day–maybe for study abroad.  We just had a couple of nights, and I knew I still didn’t know Barcelona.  I had to return. She always had something to offer.  Visiting Barcelona just once would be like visiting NYC just once for a couple of nights.

With Dad flying back at the end of our trip, I knew I’d have some time left in my vacation.  I wanted to see Spain again and looked up airfare deals.  The cheapest fare was to Barcelona and I figured that was perfect for just a few days.  I made arrangements to meet up with my friend and fellow blogger Jessica at European Escapades, uniting at the hostel just off Las Rambles near Barceloneta and the beautiful beach.

I arrived on Halloween, not sure what to expect.  Barcelona had an international crowd, so I figured there might be some parties.  Jessica and I each packed our dirndls from Germany in case there were costume parties for the night.  We met up, enjoyed some tapas, and wandered the medieval streets.  It made me sad to see another seaside medieval city that was better cared for.  Barcelona was open, warm, clean, inviting . . . very different from Genoa’s slightly gritty Medieval streets, small international scene, and overall closed perspective.  Coming from NYC, provincial Genoa was a very refreshing, challenging, and authentic cultural experience. Yet I always felt like I don’t belong, craving more people my age, more international folks to mingle with, more things to do.  Barcelona has that.  As we wandered around, I used my high school Spanish here and there, and with all the time studying Italian, it had improved my Spanish listening skills.  I was extremely comfortable here.

Exhausted in the evening, Jessica and I knew we wouldn’t make it to the Halloween parties advertised at the clubs, noting the general scene wasn’t that festive, although we did enjoy a couple of bars for tapas, and enjoyed singing along to the Ghostbusters theme song while being served by a Vampire in an Irish Bar here in Barcelona.  We fell into a blissful slumber but were awakened way too early by a giant group of manga fans who were here for the convention.  They were shouting in Spanish to each other very early.  Eventually, I came out to ask the front desk to help silence them, which is something I have never done before.  They did attempt, but shortly after the group was shouting and slamming doors again.  The hostel was well reviewed but sometimes you can’t avoid these things, especially with thin walls.  Jessica was especially disappointed because she was able to get single rooms in hotels for the price we paid here.  Sadly, though, it was an expensive city over a holiday weekend (All Saints).

Jessica was open-minded and up for anything, not wanting me to have to see things I already saw on other visits.  I mentioned I had always wanted to go out to Montserrat, a monastery in the mountains a short train ride outside of town.  We enjoyed the ride, even with the holiday crowds, and emerged in the country for fresh air before boarding a cable car up the mountain and even fresher air in Montserrat.

before the cable car at the base of Montserrat

We posed for pictures, wandered around, hiked a bit further up the mountain, and enjoyed the peaceful, zen vibe in this spiritual center.  Raised as a Catholic with many years of Jesuit education at Fordham University, it was extra special for me to be here as the area was founded by Jesuits.  I felt connected to my faith and spirituality, at peace. 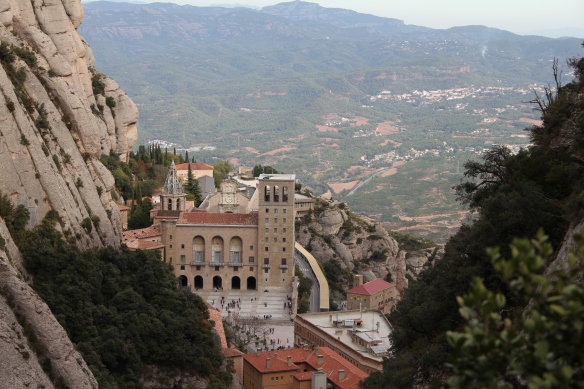 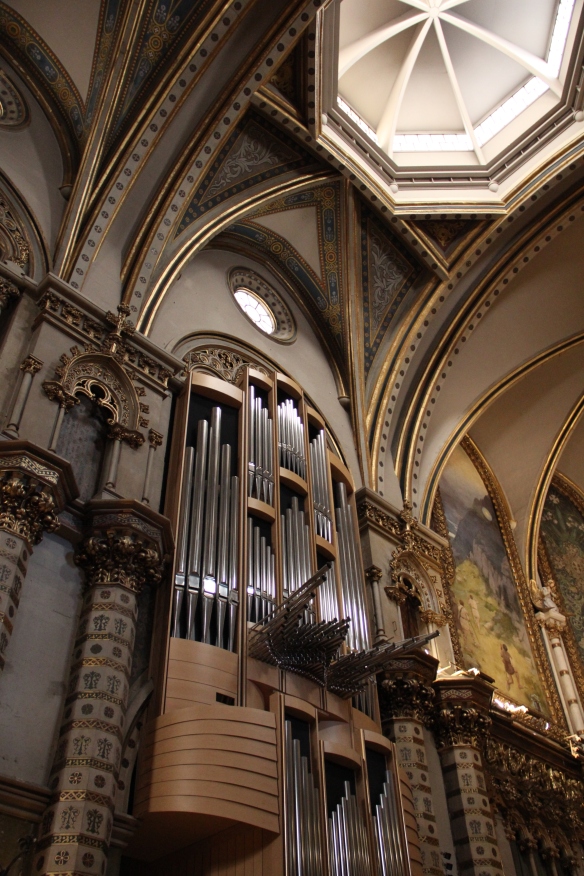 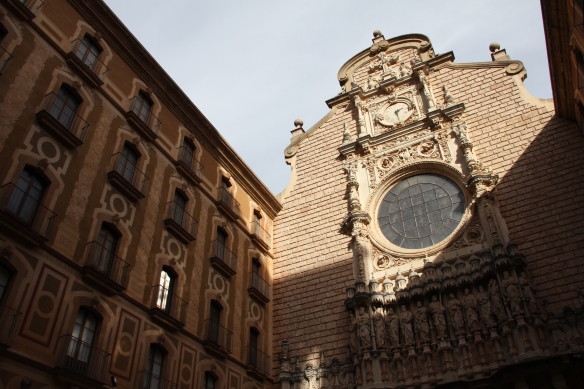 We enjoyed a simple yet delicious meal in the mountain air with splendid wine, played around for jumping sunset photos, and headed back to the city. 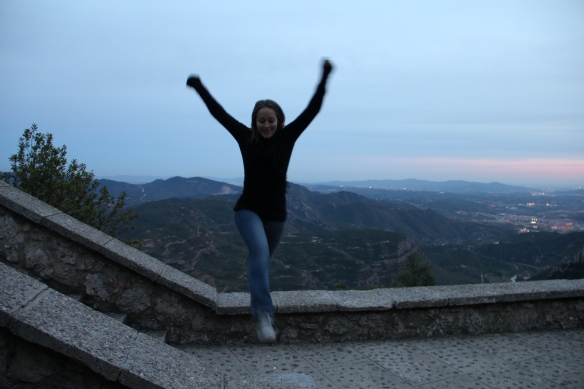 When we arrived, we found our way to the museum, following the fountain light show featuring splendid colors and designs coordinated with the music.  It was extra special because we hadn’t planned it.  We didn’t read about it in a guidebook.  We didn’t go out of our way to find it.  We had no expectations.  As I have noted in previous posts, expectations breed disappointment. It was all a pleasant surprise — one of those magical travel finds. 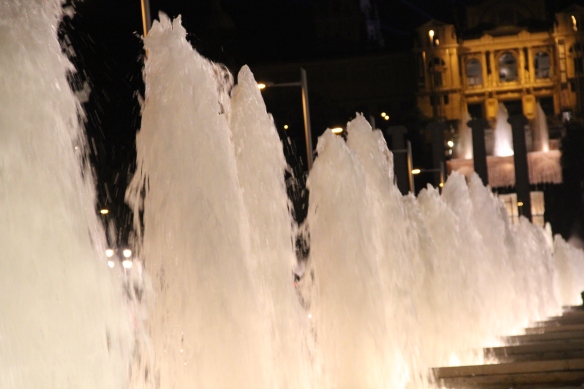 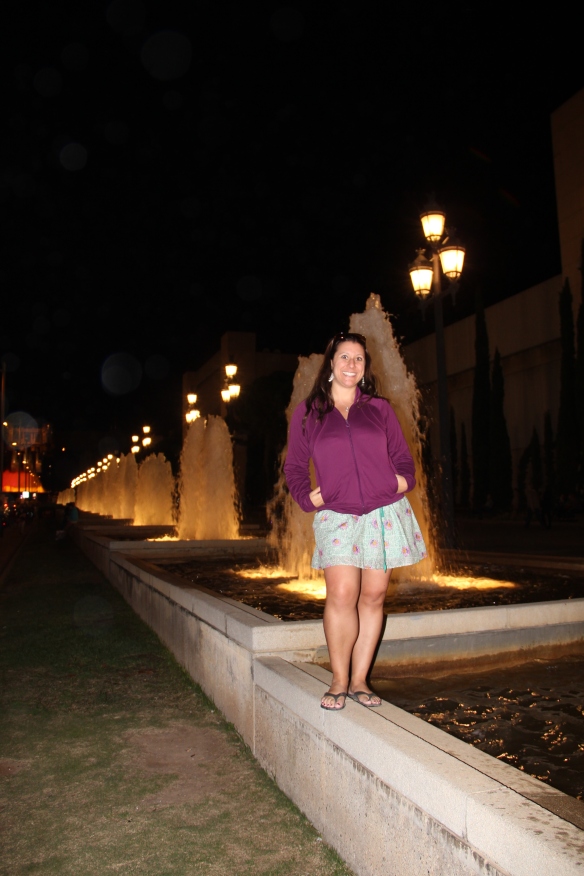 The fountains leading up to the museum 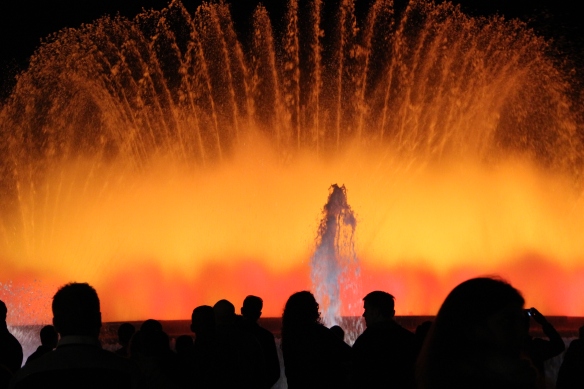 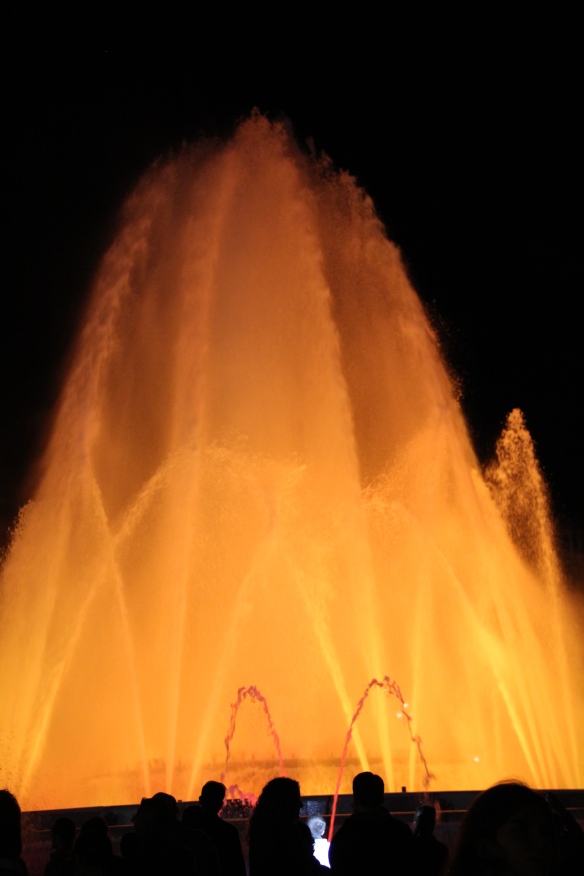 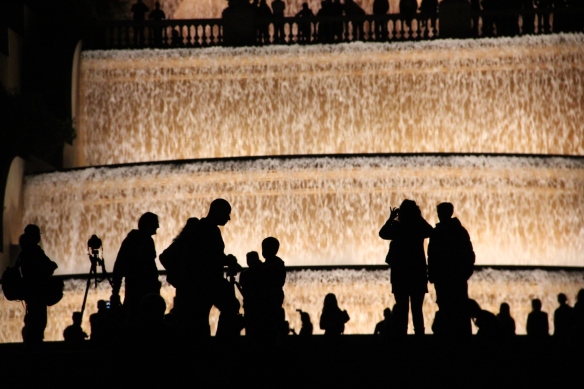 During the show, I ordered some churros and hot chocolate, dunking them in time to the music and lamenting their passing when they were all gone.  Afterwards, a quick peek at La Sagrada Familia at night — a sight I had never seen up close– then back to the hotel where we sang along to “Holiday in Spain.”

The following day, we went up to Montjuic, enjoyed free entry to the museum (another surprise), and made our way down to the beach where we just chillaxed. 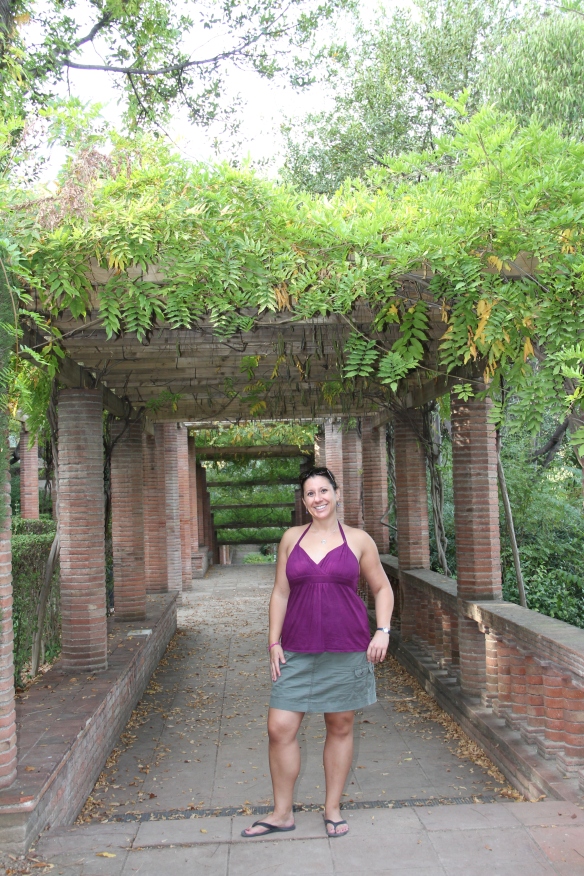 A woman approached me asking if I wanted a 5 euro foot massage.  Just what I needed! 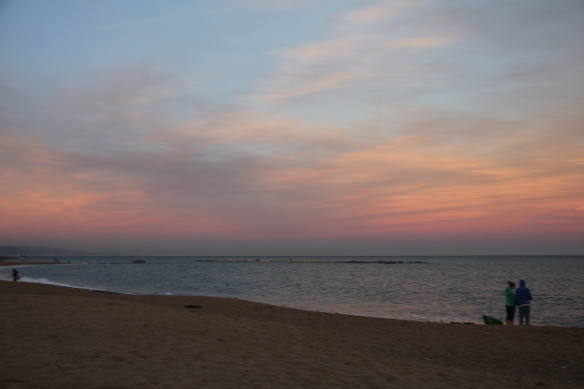 As the sun sank leaving her pastel trails, I once again found perfect peace.  Next, we ate a fabulous meal of steak and black paella along the sea.  Back at the hotel, we freshened up for a night out clubbing.  As we strolled the winding, medieval streets, we had several offers to come to clubs for free.  We went to one, and although it was kind of slow and empty, we had a great time, getting lost in the music.  And despite my best efforts, I found myself getting wildly excited when “Blurred Lines” came on.  That song just doesn’t leave your head, and I ended up humming or singing it the rest of the trip.  Poor Jessica.

The next morning, Jessica and I had breakfast and Starbucks.  (There is not a single Starbucks in Italy).  We took our luggage with us. I left it at the train station while Jessica departed for her flight home. I opted for the cheaper, later flight which allowed me a bit more time in Barcelona although I risked missing the last train back to Milan. 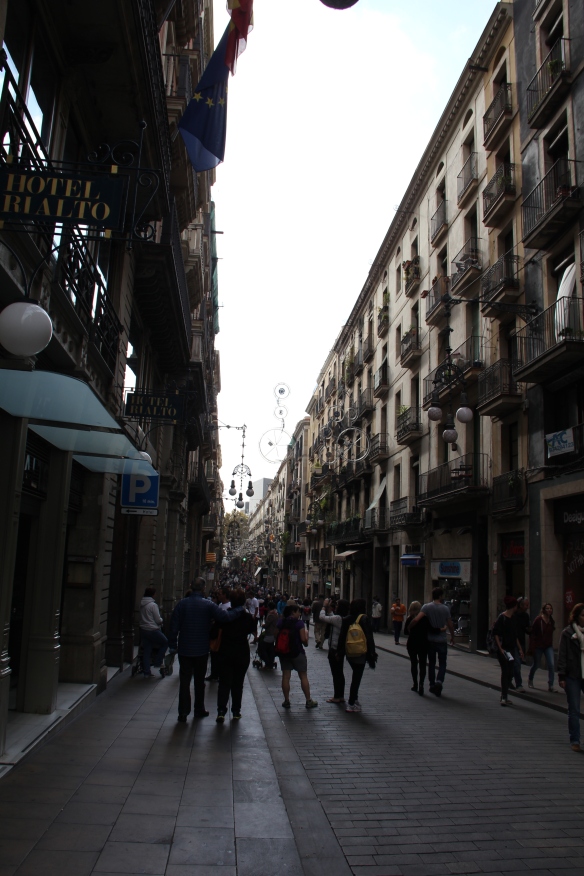 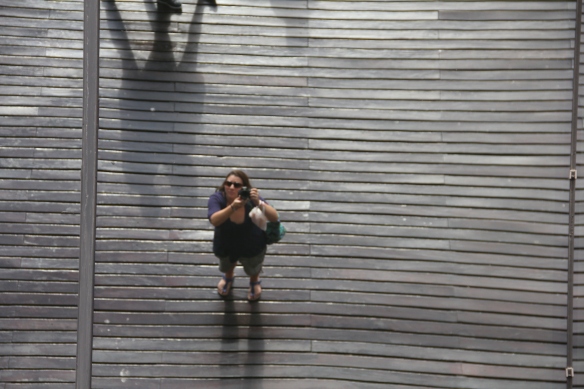 I used the time to wander the streets, enjoyed mass at the stunning cathedral, and lazily made my way to the port for a meal at the buffet chain Fresco where I just happened to double check my EasyJet itinerary when I noticed I was wrong about my flight time back.  The flight was leaving 45 minutes earlier than I thought.  I sprinted across the port, into the metro, grabbed my bag and just missed the train to the airport.  I had to wait a half hour for the next train and arrived at the airport with just enough time to sprint to the ticket counter.  As my lungs burned, I kept reminding myself “Don’t give up now.  If you don’t make it, you don’t get home tonight, you don’t get to work tomorrow. You are in major trouble and will lose a lot of money.”  I arrived at the check-in desk where they said they just closed a minute ago.  Noo!  Why did I stop and walk slowly once I arrived?  I said I was already checked in, so they let me go ahead, but they charged me extra to check my bag at the gate.  Rushing through security with all my belongings, I made it to the plane at the tail end of the boarding line.  Whew!

I arrived in MIlan with enough time to catch my train back to Genoa and back to work the next morning.  What an amazing, sunny, beautiful vacation.  This was the first time I ever had a fall break, and I loved it!  It almost kinda made up for having to work on Thanksgiving.

Here are a few more photos: