Why are Italian cats so friendly?

They want to be your friend – you don’t get to choose it.  I was convinced they wanted food.  Following me into my apartment, what else could Espresso – that’s what I have called the dark brown one—want?  I poured a plate of milk.  He meowed at me, wouldn’t touch it, and followed me around.  I can’t let strange cats hang out in someone else’s Airbnb.  But each year, they come right on in. 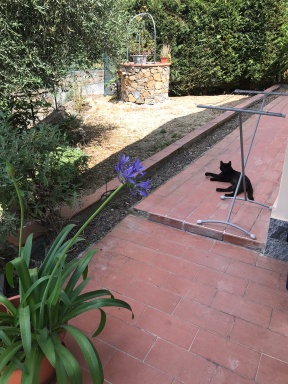 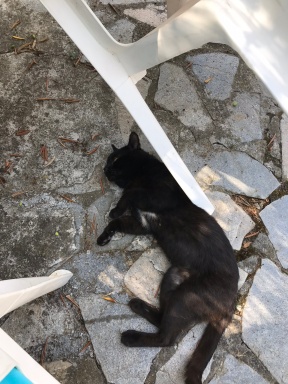 The other day, a lazy random weekday when I started this post, I ushered Espresso out.  It was mosquito time. I couldn’t just leave the door open.  I’d have a bunch feasting on me all night.  Last year, I loved leaving my French doors open during the sunsets.  Big mistake.  The mosquitos set up camp, and found me.  The ones in this area give me severe reactions–I even have scars from last year– so I couldn’t risk it this year.

I gently ushered Espresso to the door.  I watched his face as I closed it, and felt so horrible, a betrayal.  He stared at me through the mirrored glass window as if to say, “But I thought we were friends.  I have decided we are friends.”

I watched him, tried walking away and then immediately opening it again to say hello.

I’ve rented five places for a month or longer since moving home from Italy.  One was an apartment in the San Martino section of Genoa.  And one was an apartment in the Quarto section of Genoa. Each were high floor balcony apartments that didn’t have an opportunity for a cat to creep up and visit.  But the others – every single other one came with resident cats, immediate friends, begging for attention.

Cats in Italy are not just friendly, they are bold.  They assume – they KNOW—they belong in your house.  They assume – they KNOW you will love and pet them.  Italy is a culture that loves cats and babies.  Not exclusively–Sex, Prosciutto, Pizza, hell all food, the sea, driving– they have many loves–but yes, they do love cats.  You will see people leaving food out for the neighborhood “strays.”  In fact, yesterday as I came down this mountain, I saw six cats sauntering across the road where a lady was opening up a can.  Several more were gathered around her like a scene from the Lion King . But instead of holding up Simba for all to revere, it was the can.  Behold the new food!  And I swear, they didn’t look grateful.  Happy, yes.  But not grateful.  These cats are entitled. They knew she would come.  It reminded me of the time in Trieste when my father and I were climbing the local mountain with a family friend, Giorgia, who was a student there at the time.  It was twilight and a man was shaking a giant bag of cat food, feeding an entire feral colony.  “They love cats here,” our friend told us. “He always does this.”

2016. In Ruta di Camogli, I was at my computer desk, and all of a sudden a marmalade cat just walked in.  She wanted attention. I picked her up.  She followed me around.  When I would wake up and open my shutters, I would hear her say hello.  She was so bold, I caught her licking water out of the glass left on the table.  At one point I thought I scared her away.  Where is my friend?  I felt lonely — but a few days later she showed up again.  And then I realized it.    There were two!

2018 – I rented an apartment with an outdoor space, and the owner’s cat would say hello.  There were new kittens on a cat lady balcony nearby, I could fall asleep to their meowing.  When I felt bold I would go over to peek at them.  And of course, there was a bold gray one that came right up to my door and walked right on in, lying down on my kitchen mat.  Another day, she came running in as I was trying to catch a train for my flight.  She ran under the bed.  “Friend, I decide when you go!”  I finally got her out, but without much time to spare!

Here in Imperia, Espresso is never far when I’m outside.  He usually comes right up to me, rubbing by me, with his congested purr (he has some kind of sinus infection).  He gives me his belly to rub, but if I get distracted and look elsewhere while petting him, he doesn’t like that – he scratched me when I was distracted by the adorable black and white kitten, just starting to venture from her mom who continually meows at her to set boundaries. 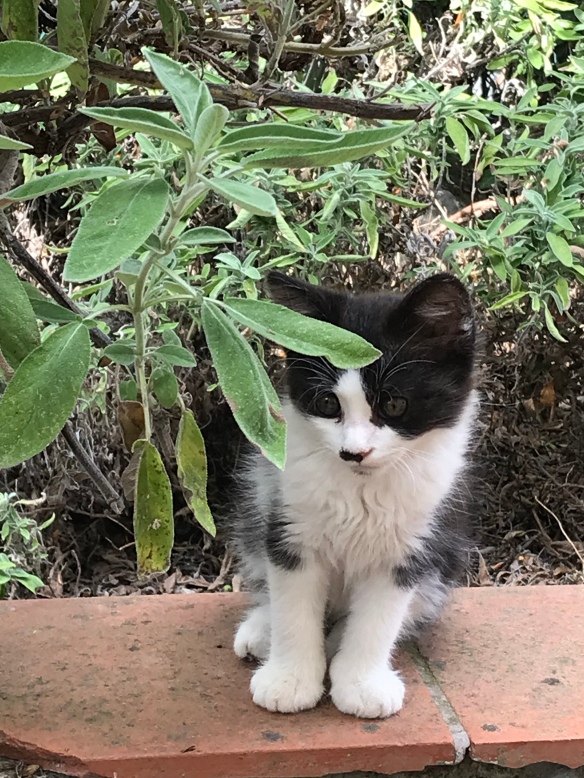 When I first met her, she came right up to me, also venturing into the house.  She playfully pawed at my outstretched finger.  Yes they are ‘feral’ but they are certainly aware of and friendly with people.  Her claws were friendly, not scratching.  I melted. A few days later, I fell asleep with the shutters open to make sure I didn’t sleep until noon.  Around 8:30am, I heard something pushing at the screen.

Well, what a cute way to wake up!  How did she even get there?  She know I was back there because I heard her meowing once on the chair, and when I opened the screen to say hello, she was determined to get there but couldn’t find a way.  I still don’t know how she did it.

After Espresso scratched me, I grew paranoid he had rabies.  Rabies is pretty lousy in that once you show symptoms, it’s too late for the vaccine and you will most definitely die.  Um, that’s brutal.  Then I didn’t see him for a while.  I knew if 10 days had passed he did not have rabies.  The other day -right at the end of 10 days,  he sidled up beside me as I sunbathed on my porch, giving his hello meow.  Yay! No rabies! I picked him up, and he purred happily.  And then he sneezed on me.  Good thing he’s so cute.  But now I have to google “Can you get respiratory infections from cats?”