On the 18th of October, I flew to Cologne, Germany after work.  That morning, my dad flew in from New York, had checked into the central hotel room, napped, and was waiting for me at the train station where he snapped this photo. 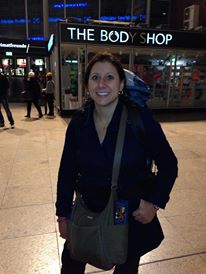 German efficiency is such a refreshing break and change of pace from Italian chaos.  German trains are on time, they run as scheduled, and their transportation links can get you easily and reliably from all locations with minimal cost and fuss.  It was just a few euros to take the train straight from the airport to Cologne city center, then a short stroll to our hotel on a cobbled lane.

“I wonder how much of this has been rebuilt,” mused Dad, looking around at all the buildings.  “Ya know, after the war.”

“I know.  Most of it, I think.  They chose to rebuild in the old style, but it’s mostly post WWII construction.”

Throughout our short time in Cologne, Dad kept mentioning the war.  He’s fascinated by WWII history, amazed at the horrors of the past and how Germany has worked to create a new, amazing, progressive, and overall pleasant country.  But I told him, “Whatever you do, don’t mention the war.”

Dad knows what I mean.  Maybe you do, too.  If not, check out this scene featuring John Cleese in an episode of Fawlty Towers.  Filmed in the 70s, it was definitely soon to be mentioning the war . . . 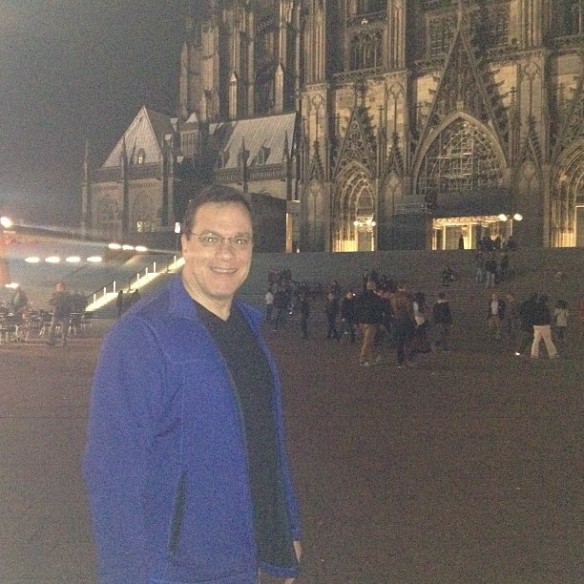 Dad upon my arrival 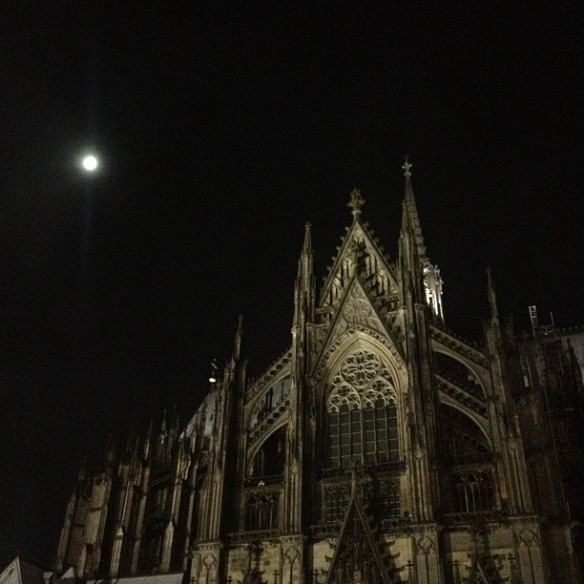 A full moon and a beautiful night — taken on my iphone

As my flight from Milan was delayed, I arrived later than anticipated and all the restaurants had stopped serving dinner.  Dad waited for my arrival to eat, so we were starving but as with other trips to Germany in the past, we satisfied ourselves with a visit to a kebab shop.  After stuffing ourselves with falafel and beer, I crawled into my bed and drifted off to a blissful sleep. 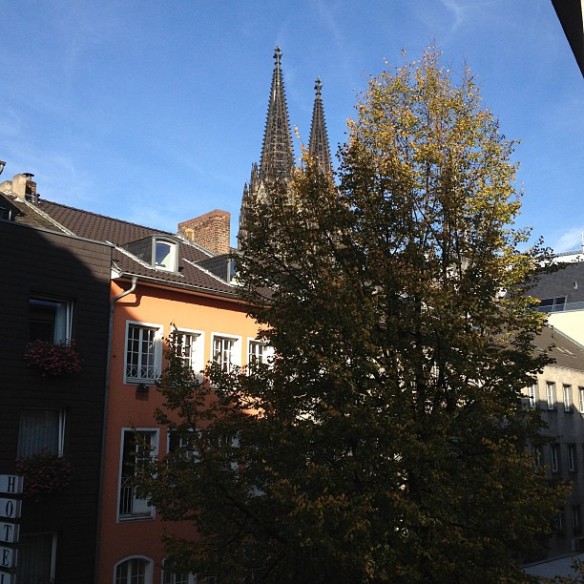 We awoke Saturday morning to a delicious breakfast spread followed by a ride on the skyride (built in the 50s) which took across the Rhine towards a beautiful leafy park in its autumnal glory.  We were looking for the spa, but weren’t sure exactly where to find it.  Then as the skyride descended, I looked down and saw naked bodies sprawled in an outdoor pool and realized that we were right over it.

“Germany is so different . . . people could take pictures.”

More on the spa later.

First, we got to stroll around the park, and in all of its every day real-life simplicity, my father and I loved this the best.  It was such an unexpected joy, a surprise addition to our itinerary.  We watched little toddlers on their tricycles san peddles, walked to the edge of the Rhine, watching the water lap the silty shore, and both envisioned our lives there. 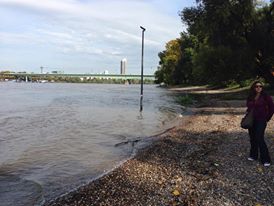 Dad: “It would be really cool if you got a teaching job here.”

Me: “It is very pleasant.  It’s pretty in it’s own way, not the dramatic beauty of Italy . . . but the quality of life, the infrastructure, everything is just so pleasant.”

After the park, it was time for the spa.  Germany has many thermal baths, several dating back to Roman times.  Cologne’s thermal baths are a recent addition when engineers kept drilling until they tapped into the source for nutrient-rich spa water.  The water itself is known for its healing properties, and the spa provides many treats focused around the water and relaxation.

Now, it’s not as weird as it sounds to be there with my father. Yes, there is a naked area.  No, it is not the whole spa, and my father and I coordinate our times.  We have a whole routine.  We meet each other back in the bathingsuit area before switching off to the naked area, to avoid unwelcome suprises.  “I thought you said 3:30!!!”   There are some things you can’t unsee . . .

We had such a blissful time swimming, bathing, exploring, and relaxing that we were there for over 8 hours.  In the regular area, I especially enjoyed the hot tea soak and the indoor outdoor pool, featuring a circular current.  Getting out of that fast moving stream was like Clark Griswald navigating the traffic circle in National Lampoon’s European Vacation.  “Look kids, Big Ben . . . Parliament.” In the naked area, I enjoyed floating in a brine pool, like the dead sea.  It’s amazing to completely relax your entire body, even your head, and you are still afloat!  I’d always wanted to try that . . . and unlike a visit to the Dead Sea, I got to do this naked.  I had the extra luxury of having the whole pool to myself a bit, but not before I almost bumped uglies accidentally with a guy next to his girlfriend . . . the slightest move will send you right across the pool, apparently.  Also, it’s very salty . . . rinse throughly upon exit.

Once outside, you rinse in a cold shower and if you wish, a plunge into a pool while the skyride descends above you.  It’s liberating.  Something that works in Germany . . . and there are guards all over the spa to ensure people aren’t gawking, taking photos, hooking up, or just ya know, being weird.

“I’d like that job!” said one of my friends.

It wasn’t my first time at the naked spa.  I had some practice in Aachen, Germany and again in Wengen, Switzerland.  You get used to it, and to be honest, I hate wearing a bathingsuit in saunas now.

After a relaxing day, we showered, left the spa, and headed for a delicious dinner in the city center.  We were drawn to the quaint architecture and charm of one building, and found out later that it was original, from the 1500s, the oldest building in Cologne.  Our waiter took us for a tour of the basement after a delicious al fresco meal.  During the tour, Dad kept mentioning the war . . . Anyways, I took the special salad with champignon mushrooms, fresh from the fields.  Good beer, good conversation.  Great day. 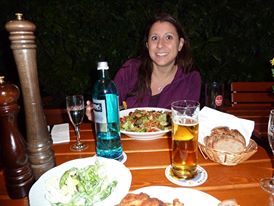 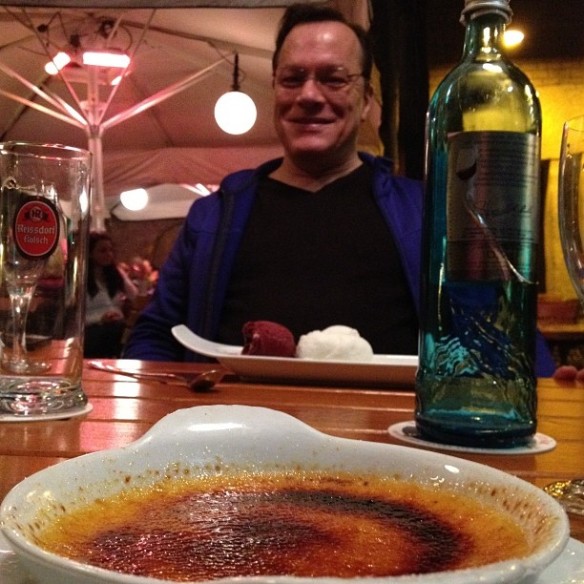 Sunday we awoke for yet another wonderful breakfast spread, followed by a stroll along the river, a one hour river cruise, and a visit to Cologne Cathedral.  Of course, Dad continued to mention the war. 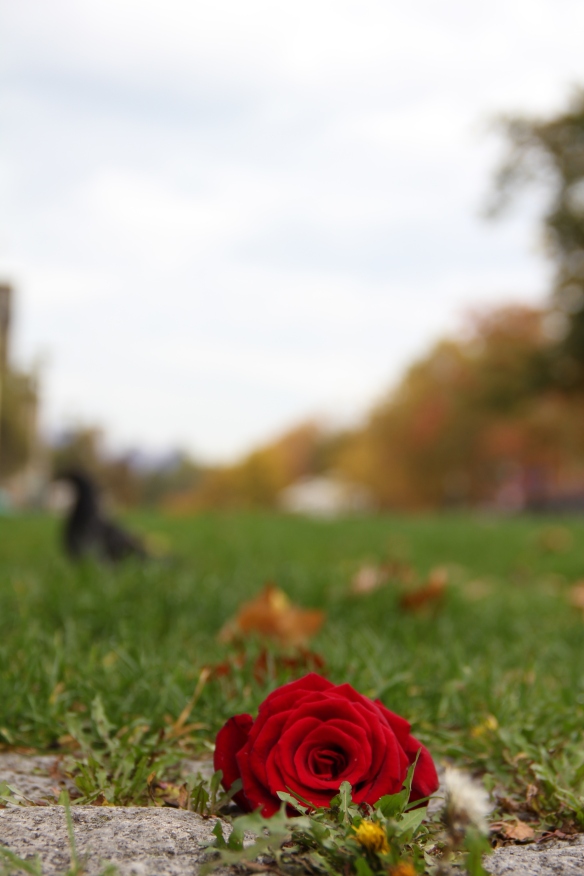 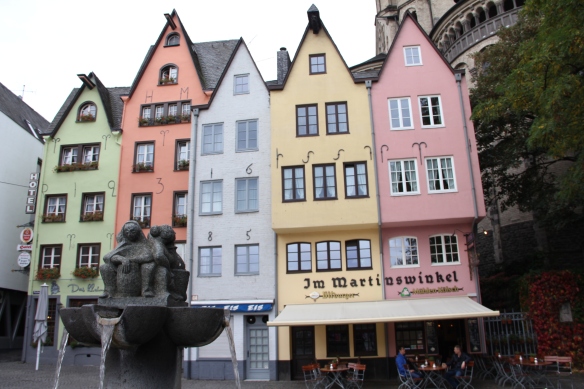 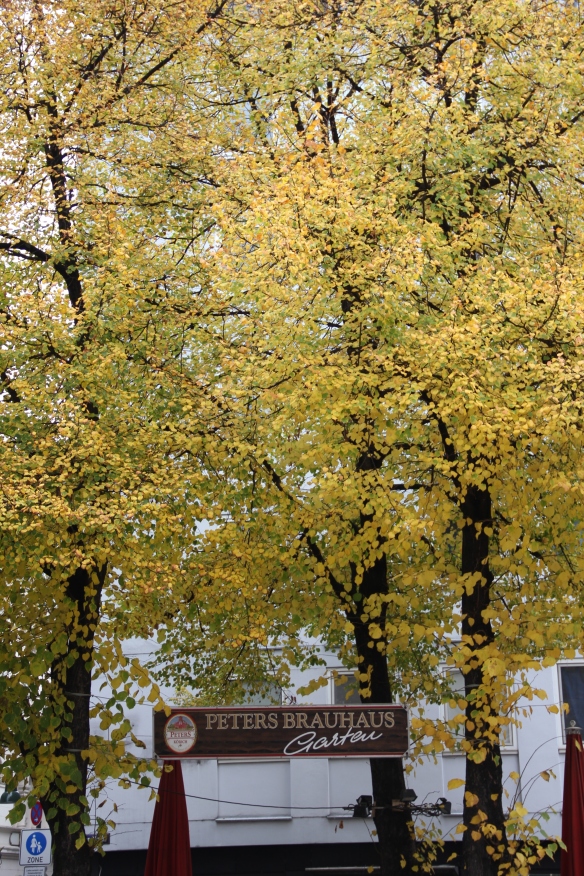 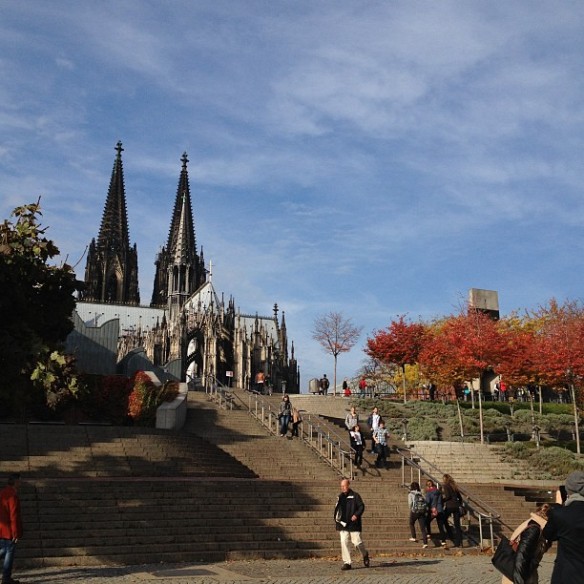 Beautiful fall colors by the cathedral 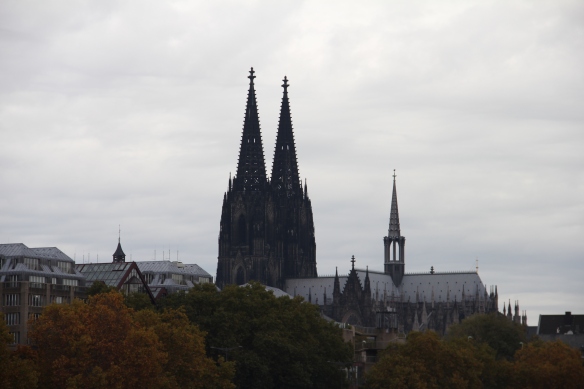 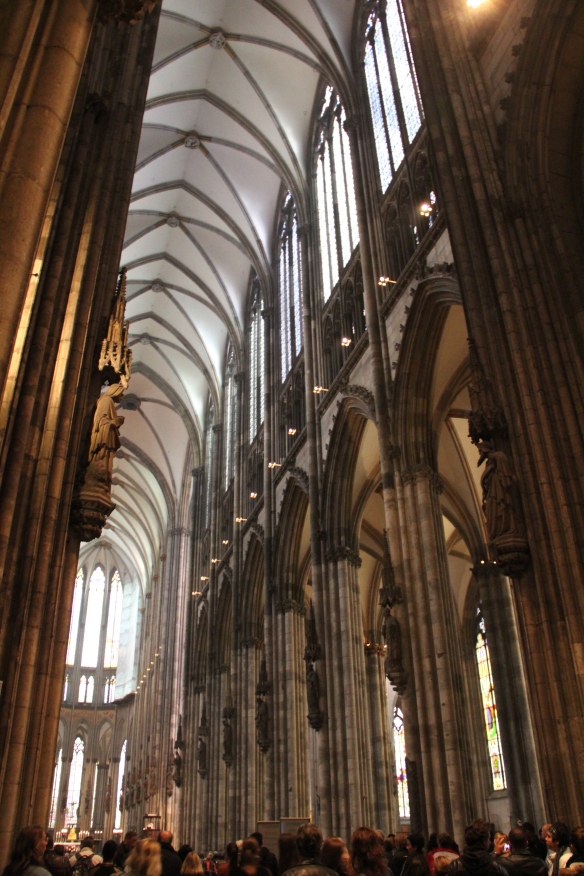 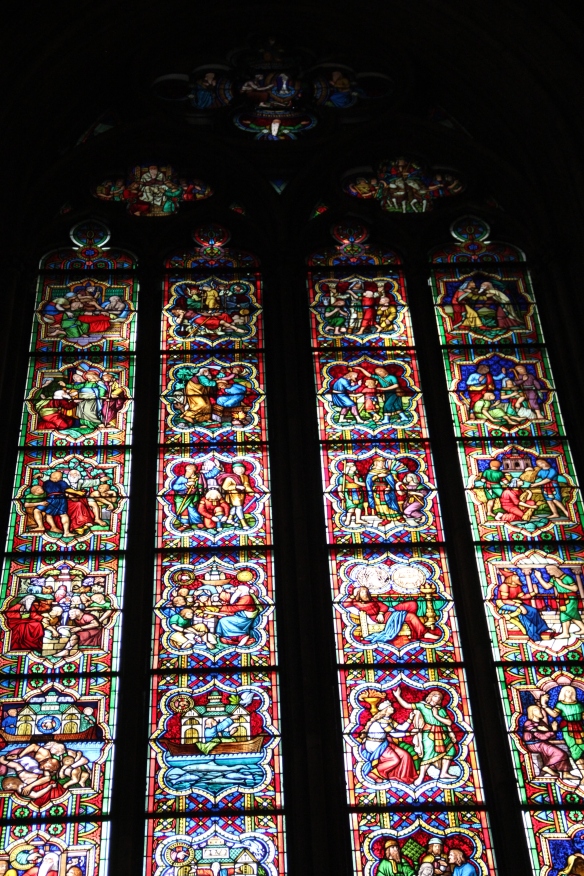 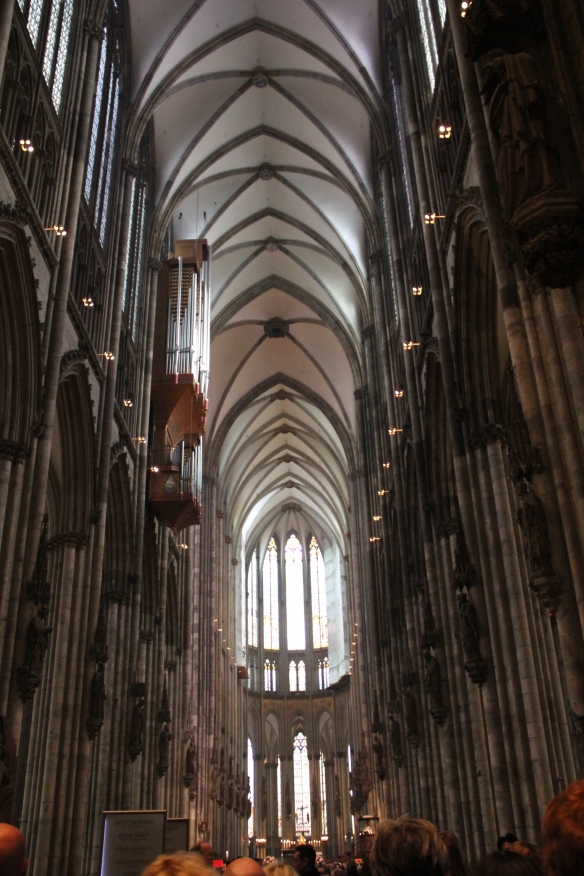 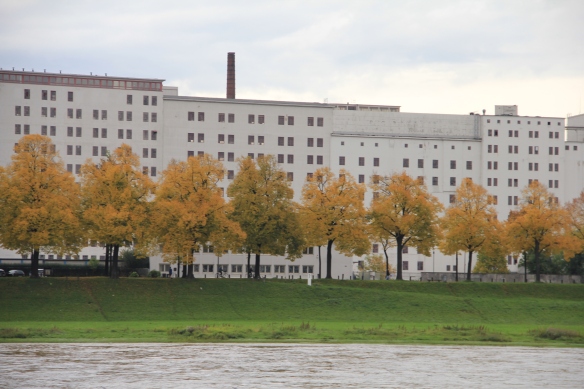 Scenes from our 1 hour tour 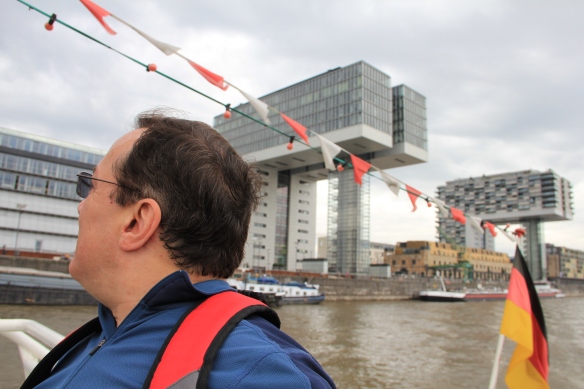 Dad always liked these buildings. (We stopped in Cologne briefly back in 2011 where he first saw them).

After a scrumptious lunch along the river (mine was chicken au gratin!), it was time for me to gather my things and head back to the airport and Italy. 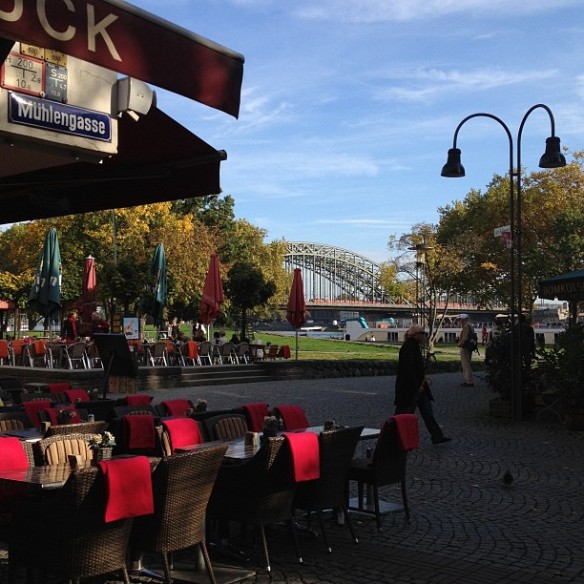 I was only saying farewell to Dad temporarily, though, because he was coming to Genoa on Friday after heading to Salzburg and Verona.

What a wonderful start to our fall adventure!

1 thought on “Don’t Mention the War”